The little things that no longer bug 3M

The little things that no longer bug 3M

A summary of the issues

The 3M manufacturing facility located in Perth, Ontario primarily faced issues regarding insect infiltration. Insects would often enter through open doorways in high-traffic loading dock areas and spread into the warehouse and production areas. Insect infiltration not only inconvenienced workers but also provided a cause for concern when it came to quality control of their products.

First line of defense
Starting from the outside-in, the warehouse and production areas were equipped with Enershield Air Barriers to seal open doorways by up to 90%. This deterrent blocks outside insects, debris and drafts created by extreme temperatures from entering and contaminating the inside space. In the production area, a complete loading dock solution was installed using foam frame shelters, telescoping-lip dock levelers and impact-resistant MXV sectional doors, which are all designed to increase process speeds and create a tight seal between the trailer and building, even when the bays are not in use. Sealing the outside air off in high-traffic areas also prevented energy loss and lightened the load on 3M’s existing HVAC system.

Second line of defense
High-speed fabric doors were installed and can open and close by multiple activations including transmitters, push buttons or floor loops. Able to fully open in 3.2 seconds, the doors are programmed to automatically close after 22 seconds (with a fast close time of 5.5 seconds). If insects do make it into the warehouse area, they will be stopped by these high-speed doors. By sealing off outside air, workers were able to increase their productivity and comfort. 3M was also able to adhere to their high quality assurance standards on their manufactured products by now deterring insects.

The solution and results

Northern Dock Systems came up with a two-step plan to successfully seal off all open areas of the 3M facility. The first line of defense involved installing multiple Enershield Air Barriers that created up to a 90% seal on open doorways, limiting the exposure of outside air, dust and bugs from entering the facility. As secondary line of defense, four high-speed fabric doors were added to separate the warehouse and production areas. 3M went a step further and installed new dock shelters, telescoping-lip dock levelers and dock doors based on recommendations from Northern Dock Systems’ full-scale solution to ensure insect infiltration would no longer be an issue. 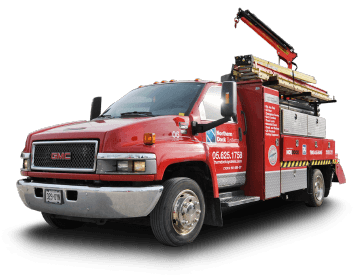 View Our Product and Service Lineup